.Realme recently launched another entry-level phone in India called the Realme 5i. The smartphone is only available in one variant that has 4GB of RAM and 64GB of internal storage. 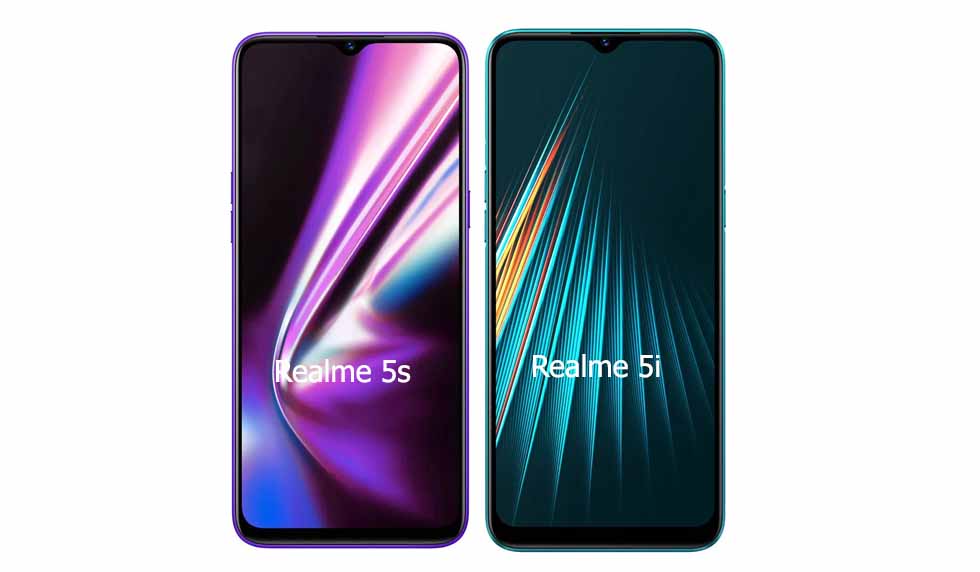 The Realme 5i is the fourth addition to the Realme 5 series. Realme 5i boasts an AI quad-camera setup on the rear and houses a massive 5000mAh battery. However, these specs are similar to another fairly new Realme phone – the Realme 5s.

To help you out, here’s a spec-by-spec comparison of the handsets.

The Realme 5i has only been launched in one memory variant in India, having 4GB of RAM and 64GB of onboard storage. It is priced at a fantastic Rs. 8,990.

If the price is the concern for you, the 5i offers excellent features for an amazing price and is the least expensive smartphone in the Realme 5 series.

Coming to the displays of the devices we are comparing, the Realme 5s features a 6.5-inch HD+ display with a 720×1600 pixel resolution. It is an IPS LCD panel with a 20:9 aspect ratio and 270ppi pixel density.


There are no differences in the display in the Realme 5s and the Realme 5i since the 5i also features a  6.5-inch HD+ display with a 720×1600 pixel resolution. It is also an IPS LCD panel with a 20:9 aspect ratio and 270ppi pixel density.

Both phones have a waterdrop notch and do not have a pop-up camera like some of the newer phones do. Although the prices are great, having a higher resolution screen – with at least a 1080p resolution would have made them more lucrative offerings.

Realme 5s vs. Realme 5i – Software and Performance Comparison

Performance-wise, both the phones perform equally well since they both come with the same Snapdragon 665 processor and the Adreno 610 GPU.

As mentioned previously, the Realme 5i is only available in one variant with 4GB of RAM and 64GB of internal storage space.

However, the Realme 5s is available in 64GB and 128GB internal storage space variants. The RAM, however, stays the same as the Realme 5i at 4GB.

Although both the phones have the same chipset and the same RAM, Realme 5s will give the user the added benefit of larger internal space.

If you need larger storage space, both the phones have a microSD card slot, and the storage can be expanded by up to 256GB on both phones.

As for the software, both the devices run on Color OS 6, which is based on Android 9 (Pie).

Overall, there shouldn’t be much difference between the two devices’ performance.

Both the devices boast a quad-camera setup on the rear. However, the resolutions of the cameras are different.

The Realme 5s has a better camera – it features a 48MP primary sensor that is paired alongside an 8MP camera and two 2MP camera units.

The front camera of the device is better when compared to the Realme 5i since it has a 13MP resolution.

On the other hand, the more affordable Realme 5i sports a 12MP+8MP+2MP+2MP rear camera setup and features an 8MP front camera.

The Realme 5s comes out as a clear winner and can take stunning shots in all kinds of lighting conditions. If the image quality is a concern for you, you can go for the Realme 5s without thinking twice.

The Realme 5s features a massive 5,000mAh battery and supports 10W charging. The phone can also help charge other devices’ batteries since it comes with the power share feature.

The Realme 5i shares the same large 5,000mAh battery, and also comes with the power share feature and support for 10W fast charging.

Realme 5s and Realme 5i – Overview and Verdict

This table will give you an overview of the two devices, and you can make your decision at a glance.

If you’re on a tighter budget, you cannot go wrong with the new Realme 5i. However, if you’re looking for better camera quality or larger on-board memory, go for the Realme 5s.