Introduction – Hearthstone Rise of the Shadows

Blizzard Entertainment is the creator of Hearthstone, an online card game that debuted in 2014. With the latest release, the Rise of Shadows, they are back in the news now. With each such release, the metagame undergoes some modifications. This is critical to keep the players attracted to the game. New challenges keep the game from getting boring, especially if they are veteran players who have already explored the ins and outs of the game. One of the drawbacks of the game is the sharp learning curve for the new players. This is one reason many players prefer the single-player option than the multi-player one.

The Hearthstone Rise of Shadows is the first attempt to navigate the players across multiple sets in the form of single stories. The story itself is based around The League of E.V.I.L. which is a supergroup created by Arch-Thief Rafaam. Here, Rafaam is successfully collaborating with other sets and working on capturing the floating wizard city of Dalaran.

To keep the game engaging, the cards keep changing which makes it difficult for new players to understand, and even for old returning players! Missing out a few expansions, and subsequently, the cards that retired and the new ones that came out, you would have a tough time getting back. However, the game itself is extremely fun and the effort you put in to learn the nuances of the game definitely pays off. The single important skills in Hearthstone would be to understand the deck balance and have knowledge of when to use which card. This is something you can only gain if you spend hours playing!

Newbies would also not have the kind of cards experienced players would have since they would have to get these form card packs. It is also a bit expensive since you would have to purchase them separately. It is a much better idea to just earn them as you play and progress. So, if you are a returning player after a long time or if you are a newbie, you can check out Hearthstone’s FAQ page. They have a detailed list of all the cards in Rise of Shadows. This is a great place to read about the different cards and start making your way towards the ones that you like.

With regards to the latest expansion – the Rise of Shadows – there are some fun cards. For instance, there are some that grow stronger with each turn and some that decreases by 1. Cards combined strategically in your deck would give you a powerful combo to play better. There are different character classes in the game and this is something you would have to study well in advance to understand the dynamics of the game. If you feel the multi-player option is just too advanced for you, you can always play single games until you learn your way around.

The Rise of Shadows will work with 135 cards in addition to some older sets that could be used in the Wild Mode. There will also be the usual annual rotation in the Standard format. The class alignment has also undergone some changes. Here, the Priest, Shaman, Warlock, Rogue, and Warrior would be evil in the Year of the Dragon. This is where Rise of Shadow begins. The other class, including the Hunter, Paladin, Druid, and Mage would be on the good side. Let’s get into some of the cards and talk about the dynamics of the game.

Scheme: This card can only be played by the evil classes. The longer they sit in your deck, the stringer they tend to get. For instance, with the Shaman AoE spell, it is usually 5 Mana for one damage to the board. However, if it stays in your deck for some time, it could potentially wreck higher damage for the same price.

Lackeys: Lackeys are a new card in the Hearthstone Rise of Shadows. This is a token card which means you cannot access this from packs as these are created by collectible cards. It comes with 1/1 stats and with a high utility effect. It might help you to know that there can only be five possible Lackey outcomes. This can give you some consistency while making the decision. 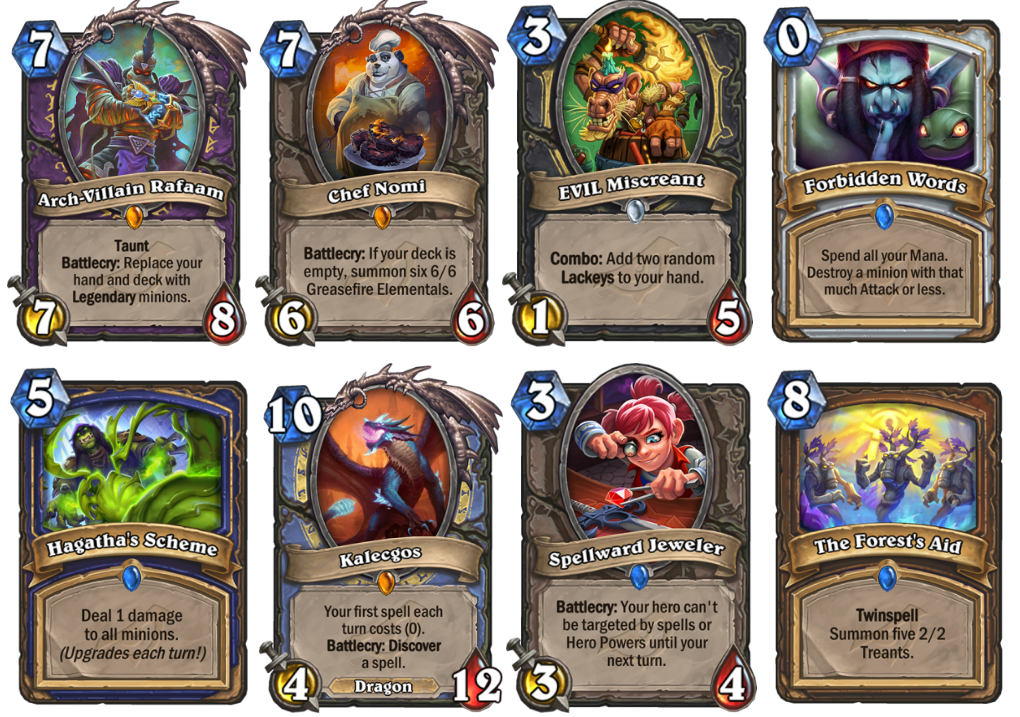 Twinspell: With this card, you would be able to cast the same spell two times. When you cast a Twinspell, the second copy of the card would be added to your deck. If you have sufficient Mana, you can play it in the same turn or for future use. One thing to note here would be that the second copy wouldn’t be a Twinspell one, meaning you cannot generate it again. It would work only once. However, if you use it wisely, it could be pretty strong. Twinspells are only available to the Defenders of Dalaran, unlike the Lackeys and the Schemes.

Callback cards: Callback could be considered to be a kind of a themed subset of the Rise of Shadows and is a cycle of cards. This would include popular ideas from the previous sets. Potentially, it could have different impacts based on how much Mana you use when playing it.

Well, there you go! Hearthstone Rise of Shadows is a great game to play, especially if you have some idea of the mechanics of the game and the numerous cards that it works with. Strategy is the key element here. While you might have some powerful cards with you, but if you don’t use them at the right time, it is of no use. As you play, you are certain to hone in your skills and have more fun than ever. There are also some guides out there which would give you an in-depth idea of the best way to play each card and its strengths and weaknesses. Check out other games here.

If you are more interested in some video games like PES and FIFA, you should definitely take a look at our PES post. It is all about the PES 2020 Release Date, Pre-Order, PC Requirements, Database, Ratings, Cover, Trailer, and More.