If you have ever been to a party where you have been bored, join the club!  Games are a great way to keep people engaged in a party – especially during the holidays. You really want to relieve stress from work or school, then this is the right place for you. Most of us own a smartphone in today’s world, making it easier to entertain ourselves. Here is a list of Social Multiplayer Games handpicked for you. You will be able to play these at any party. Most of these games will require an Android phone but you can also try your luck searching for the iOS version.

If you have ever played the escape room in real life and have been fascinated with it, then this game is for you. The main aim of the game is to solve escape room-style puzzles. Ensure that you have a pen and paper handy so that you can note down all the clues. You will also be able to download and print the missions from the Escape Team website and then find out the corresponding puzzle in the app and solve it. A minimum of 2 players are required to start the game. It can be played by up to 4 players. The game is available on the Play Store for free. However, it will require about $5 to unlock all the missions once you are in the game.

This is one of the most innovative multiplayer game that is available on the App Store. Though you will have to shell out close to $25 on this one, it is worth the price. The main aim of the game is to get people talking and laughing in a party. The game can be played by 1 – 100 players. There are many versions available on the Play Store. The only difference between the versions is the games that are included in each version. That is why it is a good idea to check the description before buying the version. The best part of this game is that you will not need any special controllers. The smartphones, tablets, or laptops will work as your controllers.

If you are after a session of laughter, then you must try this game. The app “Selfie Games” is available on the Play Store for no charge. However, one person (the host) will need to make an In-App Purchase ($7) in order to create a game. Do note that you will need a Chromecast / Fire TV / Computer / Smart TV to play. The game needs a minimum of 3 players and can accommodate up to 10 players. All player will need to download the app and connect with the host. Random selfies are taken, and everyone will need to come up with a fake caption for each of the selfies. More the number of times your caption gets chosen, the more the points you make. The aim is to ensure that you have a catchy caption with a silly selfie!

This game will test how good you are at bluffing with answers. Do you have what it takes to bluff? Psych is a game where all the players will have to come up with a fake answer to a question that pops up in the app. The same question is then presented to all other participants with 4 options which consist of one real answer, one fake answer, and two other wrong answers. You will get points if participants pick your fake answer. Though the app is free to download on Google Play Store, there are loads of In-App Purchases available. All players will need a good internet connection to play this game comfortably.

Triple Agent! is an extremely fun party game that revolves around espionage. Each player is given a secret identity, such as a VIRUS double agent or a Service agent. Only the VIRUS agents know the identity of the members in each team. The goal of the game is for the Service agents to find and remove the VIRUS agents while the latter tries to confuse the Service agents. The game can be played on a single phone and it can accommodate about 5 to 7 players. The paid version allows for 9 players along with several more features.

Need to find out who is the worst artist of the party group? – This game is a must-try then! The app is available in Google Play Store for free. The Android game is very simple where the first person gets a word and has to depict the word using a picture. The phone is then passed on to the other participants and they draw what they think the previous person drew. You have 15 seconds. When the phone reaches the last person, they have to find out the word which was shown to the first person. The more the number of people, the more the chance that the last person will not find the word. It is interesting to see how the interpretation of the word changes when the phone travels from one person to another. 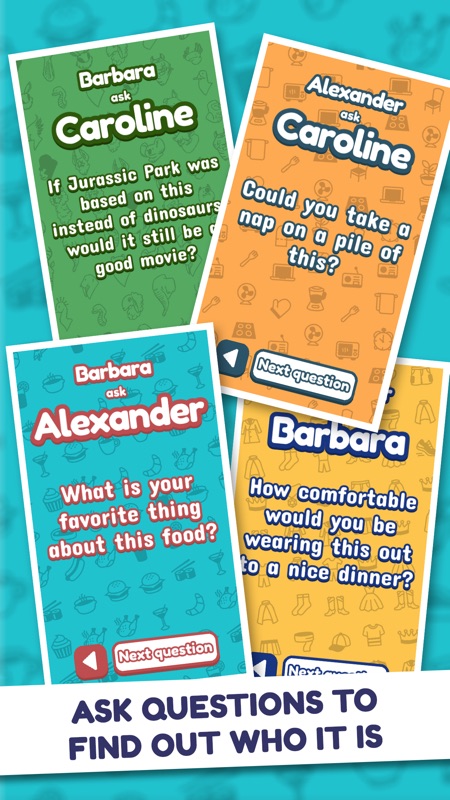 Out of the Loop

This is a great option if you don’t want to play something strenuous. It is specifically designed to be played on one phone. With nine players, the phone is passed around the group. You will first need to choose a category and pass the phone around so that everyone can take a look at the word, that is, everyone except the one who is out of the loop. Once this is done, players can ask each other questions and try to judge by the answer who was not in the loop. Once the round is over, everyone can vote on who they think was out of loop.

While the above-mentioned games are sure to bring fun and cheers to your social event, there are so many more fun games out there. Some honourable mentions include Spaceteam, Ticket to Ride, and Chwazi Finger CHOOSER.