Nokia is one of the biggest brands of smartphones in the world. When it comes to smartphones of best features with affordable prices it raises a higher bar. Following the latest technological trend, it has come up with its brand-new product in this series. Nokia 2.3, a Nokia product equipped with giant technological accumulation and latest trends. 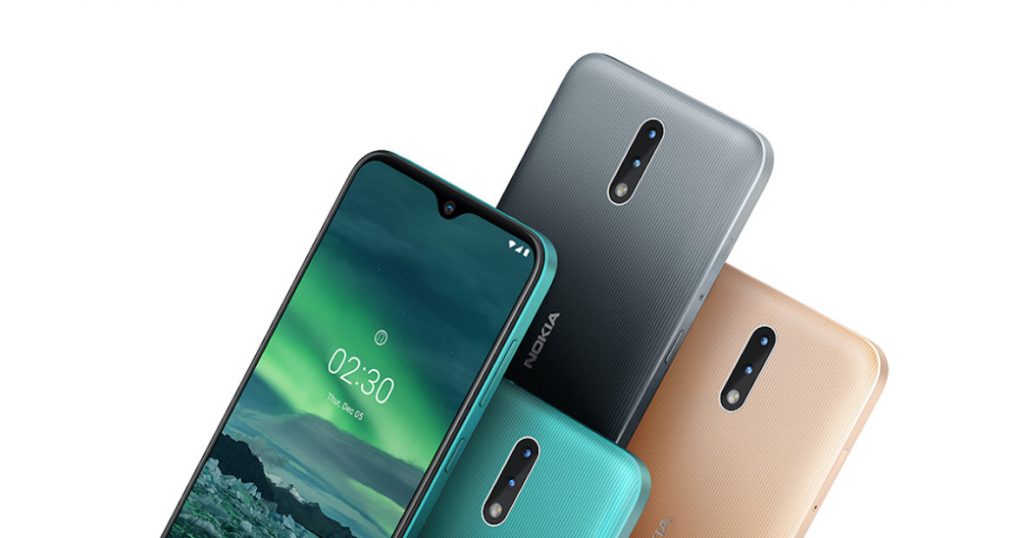 The Smartphone is the epitome of clear pictures and reliability. The outlook and brand are also one of its unique features that will turn out to be a boon and a huge launchpad for the smartphone.

Nokia 2.3 is an android smartphone, runs on the Android v9.0 (Pie) operating system.

It is equipped with a couple of days long lasting 4000 mAh battery, high quality 13 + 2 MP rear cam and 5MP front cam with an aspect ratio of 19:9 including Digital Zoom, Autoflash, face detection, gestures.

The screen resolution is 720 x 1520 pixels and 271 PPI pixel density. It has QuadCore 2GHz, Cortex A53 processor. It has 2 GB RAM and 32 GB internal storage. Suiting the new age demand of handy size of 6.2 inches display with an exceptional MediaTek Helio A22 chipset.

Nokia 2.3 is of 157.6mm x 75.4mm x 8.6mm dimensions and weighs 183 grams. This is one of the latest launches of Nokia by the end of 2019. Following its root value to reach the masses, Nokia comes up with a quite affordable price with Cyan Green, Sand, and Charcoal colors.

Nokia 2.3 has come up with a price of Rs 8199. The smartphone was launched in India in late December 2019. The camera and the colors are eye-catching aspects.

The smartphone follows the latest trend of the dual rear camera. Nokia 2.3 has come up with a dual-camera feature of 13 MP + 2 MP rear camera. The back camera has a 13-megapixel main camera and a 2-megapixel depth camera.

The reliability in the camera clarity has never loosened up. The smartphone offers the best of clarity with its unique in-built feature. It has a unique feature of suggesting the best shot among a series of pictures. For the front camera, it gets a 5-megapixel camera for selfie and video calls.

The eye-catching hardware and presentation are other unique features that make the phone more recommendable. The smartphone is equipped with 6.2 inches front display with a shining glare in it. It has an aspect ratio of 19:9 for better video experience.

The smartphone supports high-quality videos and pictures with high camera qualities. The smartphone is 157.7mm x 75.4mm x 8.7mm in dimensions and weighs 184 grams. It is a very handy smartphone and has all the demanding features of smartphones today.

Nokia 2.3 is an Android phone which offers v9.0 Pie version and is compatible with the upcoming Android 10 upgradation. It is open for upgradation in the coming year.

It has got a powerhouse non-detachable battery backup of 4000mAh. The battery has 2 days calling longevity. The quick charging feature is available with the smartphone.

The smartphone is having 2 GB RAM for apps and games. Moreover, it has 32 GB of internal storage. The RAM is provided with sufficient space to use the latest applications and games. It supports the latest updated versions of most used applications.

It has a feature of Wifi which supports 802.11 b/g/n standard which offers more reach to the bandwidth and henceforth affects the connectivity. Bluetooth, micro-USB, USB-OTG supported. It’s a dual sim smartphone with both the SIM slots supporting 4G/LTE.

It has a proximity sensor, accelerometer, and ambient light sensor. It pertains to the gestures as a part of the sensors equipped in-built. The navigation sensor feature makes this smartphone to navigate and project the satellite view and the terrain view through Google Maps application.

Pros of the phone

The brand value of Nokia is its biggest pro. Nokia has established itself in the market remarkably. This reliability asset is going to act as a launchpad for the launch of this smartphone.

In addition to this, the battery backup is quite remarkable. The smartphone is equipped with 4000mAh lithium polymer battery backup which is longlasting up to two of calling days.

The widespread support system of Nokia throughout the world is exceptional. It is another advantage of Nokia 2.3. The customer support is definitely going to help in the boom of the sale of the smartphone.

PLACES TO BUY: Nokia 2.3 smartphone is available on all the major e-commerce platforms on sale from December 27, 2019.

Cons of the phone

The setback for the smartphone Nokia 2.3 is its medium speed. It is equipped with QuadCore 2GHz, Cortex A53 processor which is a good processor. But in this furiously moving era, it might have to go through some roller-coaster rides. Being an average processor holder, it might be hard for this smartphone to cope with some hard run applications.

Nokia lately in 2019 has launched a smartphone that is built to suit the pocket of a common and smart user. Its simple user interface has given the eye-catching ability to this smartphone. Nokia once again presenting phones under 9000 INR in major markets with Nokia 2.3. The physical appearance of the smartphone is another unique feature.

Battery life and software support are the two things that make this smartphone a great handset to rely upon. The smartphone possesses 271 PPI pixel density to spot the best image out of the bunch of images. The video recording feature includes 2160p,[email protected], [email protected], 480p,360p. It consists of all the abilities to fetch the best of reviews by the users.