If this rumor stands true in the future, it is going to be a bigger update on the most awaited OnePlus 8 series. We have seen the first few renders which claim that OnePlus 8 Pro may not have many changes from the existing OnePlus 7T Pro on the design front. 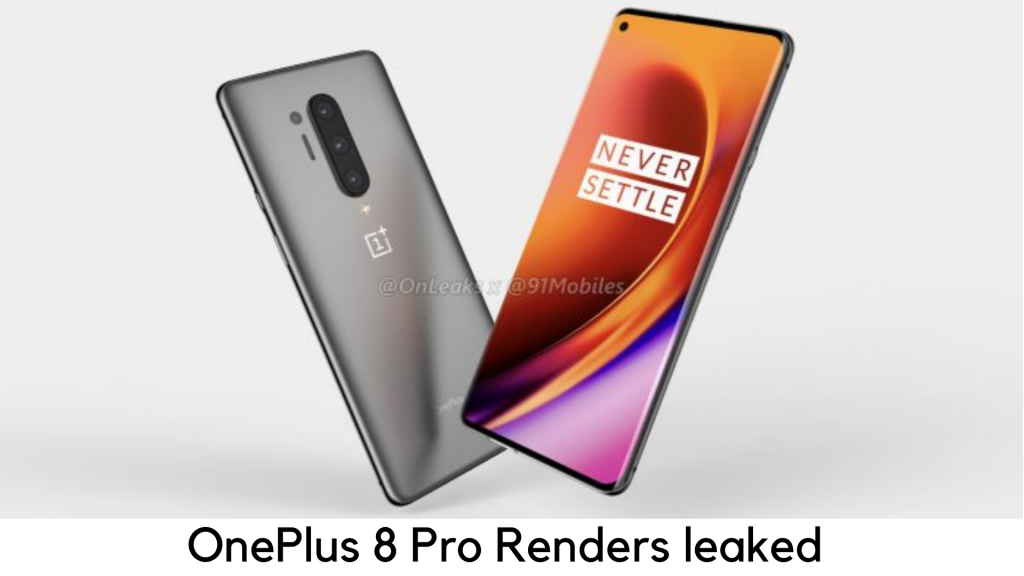 OnePlus seems to be busy in promotion activities to boost sales of its OnePlus 7T series, such as OnePlus 7T, OnePlus 7T Pro MacLaren Edition, and OnePlus 7T Pro. It seems that the company has already been working to launch its next-gen OnePlus devices anytime soon.

Meanwhile, we have got some renders on how OnePlus 8 Pro is going to be like. For the people who were looking to have a newer design of OnePlus 8 Pro than OnePlus 7T series, they might be disheartened.

According to leaked rumors, the phone will also ship with a hole-punch selfie camera on the front. It means OnePlus has finally ditched the traditional pop-up camera design considering the latest trend of punch-hole display.

The pop-up camera design has been seen on OnePlus 7 Pro, OnePlus 7T Pro McLaren Edition and OnePlus 7T Pro. For OnePlus fans, this punch-hole camera maybe a sigh of relief.

Along with the renders, the report also hints some of the premium specs, including a huge 6.65-inch display size of OnePlus 8 Pro, but it is quite smaller than on OnePlus 7T Pro, i.e. 6.67-inch.

“Max J, a smartphone tipster, added an image on Twitter with “Be a Pro” caption flaunting 120Hz display. He confirmed it was related to OnePlus in another tweet.”

Back to the renders, we have seen various design aspects of OnePlus 8 Pro on 3D renders. We haven’t found any major changes in comparison to the current OnePlus models.

OnePlus 8 Pro will also reportedly measure the dimension of 165.3×74.4×8.8mm. One can also check out the video of OnePlus 8 Pro showing device on all sides shared by 91Mobiles on YouTube.

There are triple cameras available vertically on the back panel with a 3D ToF sensor next to it with some other sensors. Below the camera sensors are LED flash with Power button and Alert Slider on the right side and left side having Volume Rocker.

It has a USB Type-C port at the bottom as well as a refreshed speaker grille, just like in OnePlus 8 leaks. Since there is no pop-up camera module, the top end simply has a microphone. There are no other details available on other hardware and software specs yet.

The 3D ToF camera might be used for features like AR, 3D photography, and other purposes. Also, OnePlus 8 series may have 5G support.

How to Know When Someone Unfollows You on Instagram?

Xiaomi Unveiled What Might Just Be The Best Camera Phone & The Best Cheap Phone, Ever!