WhatsApp is one of the most widely used messaging apps globally. Developed and maintained by Facebook, WhatsApp routinely keeps rolling out new features for its users.

The newest feature implemented by WhatsApp is the ability to lock the app using a fingerprint.

iPhone users have been able to use Touch ID and Face ID to secure their WhatsApp chats for a while now.

Since the begging of the features’ testing phases in August, Android users have eagerly anticipated the rollout of the Fingerprint Lock feature.

WhatsApp has finally officially extended this functionality to Android-based devices.

Earlier, Android smartphone users had to rely on third-party apps to secure their data. Some manufacturers like Xiaomi and OnePlus introduced built-in applications that allow securing any app with a fingerprint.

The rollout of an official fingerprint security feature from WhatsApp enables all users to secure their chats regardless of which smartphone they use.

Here is a quick, seven-step guide to enabling fingerprint lock on WhatsApp

You have now enabled fingerprint lock on WhatsApp. Also, you can now set how long you want WhatsApp to stay unlocked once launched.

You may choose between the ‘Immediately,’ ‘After 1 minute,’ and ‘After 30 minutes’ options.

The WhatsApp fingerprint lock feature also gives you control over your notifications. You get to choose whether a new message notification will display the content of the message and the name of the sender when the app is locked.

One can disable WhatsApp’s fingerprint locking feature just as easily by navigating to Settings > Account > Privacy > Fingerprint Lock and toggling the ‘Unlock with fingerprint’ off. 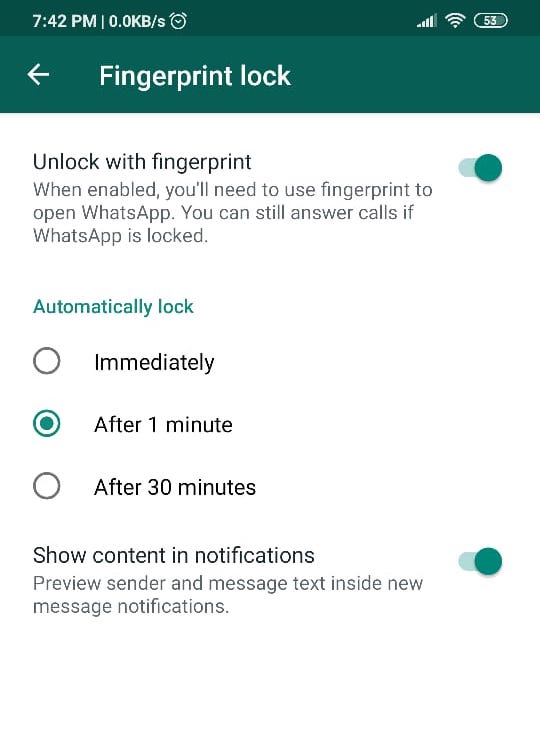 With the long-anticipated security feature finally rolling out, WhatsApp users can now enjoy better security on their messaging app without having to rely on third-party applications.