Google Pixel smartphones are well regarded for their unmatched camera specs. In DxOMark’s camera testing, the device scored overall 112 and we are back with a detailed review of its abilities. This time, the audio capabilities of Pixel 4 have been tested. 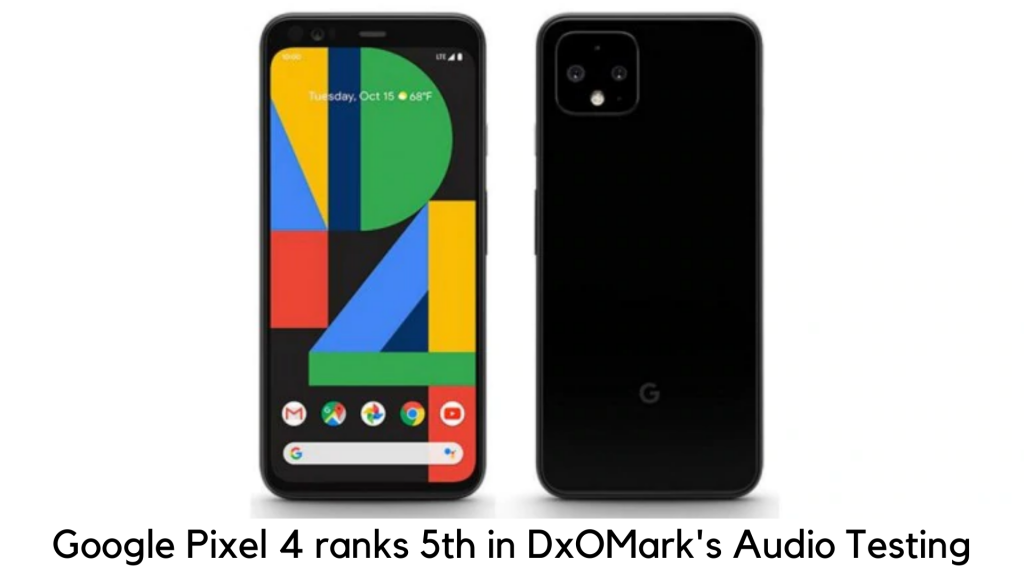 In its analysis, Pixel 4 ranked 5th in the category of premium smartphones when the blog site tested its audio performance. When it comes to the same, it was also the third-best among Android smartphones. Wondering which device won the top position? It’s none other than Huawei Mate 20X.

Let’s get back to the point. Pixel 4 scored 68 overall and successfully outperformed Samsung’s premium flagships – Galaxy S10 Plus and Galaxy Note 10 Plus 5G.

However, the four smartphones beating Pixel 4 smartphones were iPhone XS Max on the fourth spot, iPhone 11 Pro Max on the third spot, Asus ROG Phone II on the second spot, and finally Huawei Mate 20X on the top spot.

When it comes to scoring breakdown – Pixel 4 scored 63 in recording and 70 in playback. According to the audio review of the blog site, the playback quality of Pixel 4 was quite impressive and decent, considering its smaller size than other flagship phones.

The phone performs quite well against the like of Mate 20X. When used on watching movies and gaming, the phone performed really well. But the bass effect of the phone lagged behind various top-end phones. Due to this reason, it scored lower in comparison to other premium budget devices.

When it comes to recording, Pixel 4 came out with consistent recording and decent volume performance. In loud environments, it performed really well. But there were annoying resonances in the bass aspect, which brought ‘boomy impact’. Due to this reason, the phone scored lower in the recording.

The blog post concluded, “Google Pixel 4 performed really well in DxOMark’s audio tests. Well, it could be more improved though.”

The smartphone is powered by Qualcomm Snapdragon 855 octa-core processor and 6 Gigs of RAM. It runs the latest Android 10 and gets its juice from a non-removable 2800mAh battery. It supports the company’s exclusive fast charging.

Google Pixel 4 is backed with 64GB of storage and supports an eSIM and Nano-SIM.  The device was launched in simply Black, Clearly White, and Orange color options.

It has all the connectivity options, such as GPS, Bluetooth 5, Wi-Fi 802.11 a/b/g/n/ac, NFC, dual 4G support, and USB-C port. One highlight is that the device supports the Face Unlock option for added security.

How to Install Call of Duty Mobile on Your Smartphone?