Blackberry has seen a time when its popularity was second to none. The brand started as a phone for corporate execs through which they could have one-on-one encrypted chats and share private data.

However, with the introduction of the Android operating system, the Blackberry range of smartphones started to lose a lot of customer base. Brands like Samsung and a deluge of others took over, leaving the company somewhat shaken and unable to evolve. 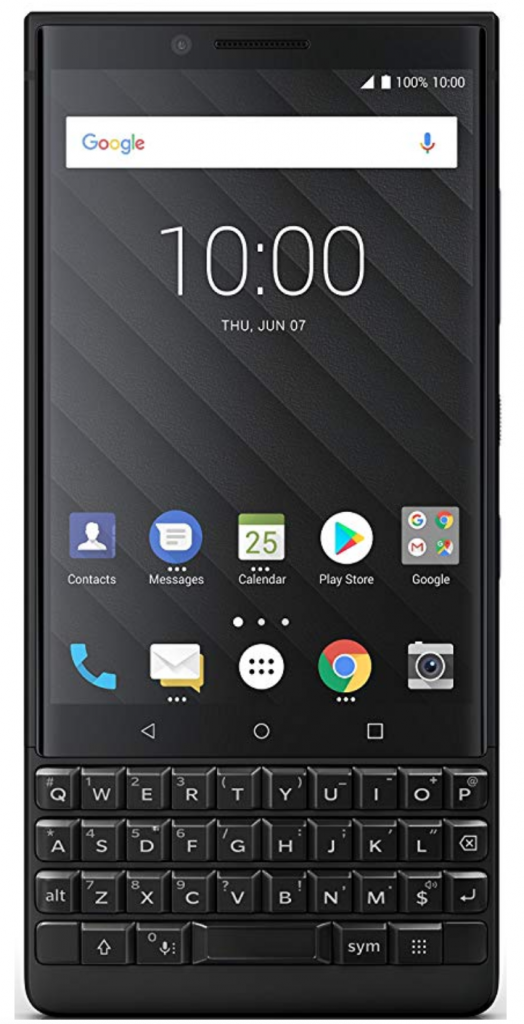 However, to revive the Blackberry smartphone industry, the company released its Android smartphone Blackberry Keyone last year. It supported the Android operating system and provided a large touchscreen and a full physical keypad.

This year, the company has again offered the market the successor of Key one, which is named as BlackBerry Key2.


The Blackberry key2 has a much powerful processor, better battery life, and increased camera performance. Blackberry has launched the phone at a premium price of $650.

This good-looking phone is much sleeker and compact in looks when it comes to the design. Since the entire body is divided between the screen and the keyboard layout, you will never feel the screen being too short or the keypad being small.

The proportion between screen and keyboard is perfect for those who like using the keyboard for typing.

The mobile comes with a USB C type charger port, which means it will support faster charging time and faster data transfer speeds. It also comes with a 3.5mm jack, which some of the premium smartphones miss in the market.

The phone has a 4.5-inch LCD screen with 1620×1080 resolution and a bright and clear display, which pops out colors naturally with high contrast and brightness ratio.

The screen size is the same as what was used in the Key one device, but the display and colors seem to be more vivid and bright. The text on the screen appears to be clear and visible, even in the most intense sunlight.

The BlackBerry Key2 houses a powerful Snapdragon 660 processor, which can provide decent performance when it comes to multitasking. The multicore processor can efficiently run multiple applications at one time.

However, at this price point, many different smartphone brands are providing Snapdragon 845 or even 855 chipsets. Snapdragon 660 can be found on a lot of different mid-budget phones and does give an excellent performance. The smartphone comes bundled with 6 GB of RAM for smooth app operation.

It might disappoint you when it comes to hardcore gaming, but most of the blackberry users do not purchase the phone for gaming.

Key2 also comes with a 3500 mAh battery, which as per the company will provide a full day of battery life with regular usage.

Since the battery is combined with a mid-range processor, it will not drain much power while still being efficient. Also, since the screen is the biggest battery drainer, a smaller screen size helps in spending less battery life.

Other Features of BlackBerry Key2

From the old days, Blackberry has been known to provide the best security features to given end to end encrypted chat and data transfer. The phone works on Android 8.1 and will be getting security updates from Google in the future, making the device much more secure. Blackberry has still retained some of the software that used to run on its operating system to android.

Blackberry’s locker application has improved over previous smartphones. The app can secure your other apps and even the launcher on the home page if you want.

The main feature of this phone is the physical keyboard. The keyboard is super-soft to use, very similar to the earlier Blackberry devices.

If you are new to the keyboard style phone, then it will take you very little time to get used to it, thanks to the comfortable and beautifully designed keyboard.

The keyboard has a glossy button and has an exceptional finish. The keys are 20% longer than the keys on the Blackberry Key one. Apart from regular usage, the keyboard is also touch-sensitive, which is useful to scroll through the screen, just by sliding the fingers on the keyboards.

You can also swipe the finger on multiple keys to create a word while typing. The Speed key function on it, lets you create a shortcut for an application by simply pressing a single key.


The phone also comprises a dual camera setup where both the camera sensors are 12 megapixels with f/1.8aperture and f/2.6 aperture. The HDR mode on the camera provides great-looking photos. Furthermore, low light photography is just satisfactory on these sensors.

The camera can take good quality night portrait photos and has a good blur effect with natural colors and exposure.

Blackberry Key2 is a worthy successor to the Key one and has some significant and significant improvements over the previous generation. The phone itself has a great design, a better keyboard, and a faster processor.

Although at such a high price point, we could have expected a better and high-end processor, still the phone works flawlessly even with multiple applications open. If you are a blackberry fan and want your hands on a keyboard style pad, then this is the phone to purchase.

Are Huawei Phone Android Systems Still Safe To Use?