Amazon has truly made a great name for itself in the smart home market. Of all the devices it has designed and manufactured, the Echo and the Dot are among the most popular Alexa-powered devices. In fact, they are so popular that Amazon has been working hard to provide updates to both of them. The latest version of both the devices was launched recently – The Echo (3rd Generation) and the Echo Dot (3rd Generation) with Clock.

While both of them feature built-in omnidirectional microphones that can pick up the user’s voice across the room, both of them have some major differences regarding other features. So, which one makes for a better choice? Before delving into which smart speaker is better, let’s take a look at Amazon’s voice assistant, Alexa. Alexa can help you with recipes, news, homework, weather and traffic updates, and a lot more. You can also create routines for specific times and even create skills. With Alexa Guard, Alexa would be able to listen for danger sounds and even chat with your guests, thanks to the “doorbell concierge” feature.

You can use either of them to place phone calls to the US, Mexico, the UK, and Canada, simply by assigning your mobile number to your Amazon account. Give it access to your contacts and you are all set! Both Echo and the Echo Dot can carry out your commands based on the skills that you have activated.

The third-generation Amazon Echo features impressive updates. Its new twilight blue color option is a hit among the users as well. It also has improved sound. To wake the device, simply use the wake word – “Alexa” and the virtual assistant will spring into action. Thanks to the 360-degree omnidirectional microphones, you will be heard regardless of where you are in the room. The latest version of the Echo also features an advanced seven-microphone array. It is so developed that it will still hear you even if you have music blasting in the house. Since Amazon Echo devices are so popular and pretty reliable, lots of other smart device manufacturers are also designing other compatible devices, such as Philips Hue lighting systems and Honeywell thermostats. Now, you can effectively control and monitor your smart home via your Echo device or through the Alexa app. Did you know that Alexa is compatible with as many as 85,000 smart home gadgets? 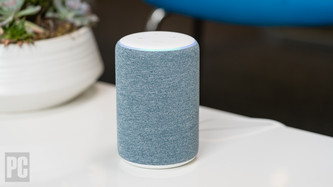 The Echo Dot with Clock’s major feature is its auto-adjusting LED display. Looking more like a hockey puck, it is surprisingly light in weight. While the third-generation Echo Dot is slightly heavier than the previous models, it is also considerably lighter than the latest Echo release.

Echo Dot is mainly known for its portable nature. It is quite small and easy to pop it into any bag. You are very likely to find space for it in your house, mainly because it doesn’t need a lot of it!

Comparing the Amazon Echo and Echo Dot devices in terms of size, the former is pretty similar to the 2nd gen model, although slightly wider. The third-generation Echo Dot is quite small in height but features the same diameter length.

Both the devices come with a built-in speaker. The Echo has a large, 360-degree speaker offering a high-quality sound. The smart speakers feature a 0.8-inch tweeter, a 3-inch woofer, an awesome audio quality, and increased volume. The latest version is designed with Dolby processing for improved dynamic bass response and crisp vocals. You can use Spotify via the Echo and listen to all your favorite songs!

Considering the third-generation Echo Dot, the latest release has much better sound quality when compared to the older models. Thanks to the addition of a larger driver, users will be now able to enjoy loud sounds. Both the devices come with a 3.5 mm output jack so that you can easily connect them to an external speaker via an audio cable. Between the two of them, Echo wins hands down regarding the sound quality. Although the Dot has improved a great deal, it needs to get better to reach Echo’s superior sound quality.

Smart speakers are specifically designed to be kept indoors. This is why it is vitally important to see how they do aesthetically. The new Echo 3rd gen is available in four different colors – Charcoal, heather gray, sandstone, and twilight blue. Since it is offered in a variety of looks, you are not likely to find trouble choosing the one that will go great with your home’s décor.

On the other hand, the latest version of Echo Dot is available in charcoal, heather grey, plum, or sandstone. You could also go for the 3rd-gen Echo Dot with Clock. This has an LED display that can tell you the time and temperature. You can also set a timer. The LED display features auto-adjust lighting depending on the surroundings.

Cost is a major concern for many, especially considering that smart devices are just entering the mainstream market. If you are on a budget, the Echo Dot may be a good option to go for since it is half the price of the Echo and features almost the same functionalities and features. On the other hand, if you don’t mind spending a bit more, the Echo will be a great addition to your home.

Besides the size and cost, the only major difference between the Amazon Echo device and the Echo Dot is the quality of sound. If you are not too picky or fussy about this, you could go with the Echo Dot. Are you are just purchasing this to interact with Alexa? Then, this would be a good buy. If you are serious about setting up your smart home in the Alexa ecosystem, third-gen Echo would be a great option. You will also receive excellent sound quality. You can also choose to upgrade and buy the Echo Dot with Clock!

The Worst Apple Watch Problems, And How To Fix Them