Samsung has unveiled its Galaxy A90 5G at an annual Berlin tech show, IFA 2019. It is the latest addition to its 5G devices and the latest entry to the affordable Galaxy A range by Samsung. Basically, 5G is an expensive feature yet. So, the 5G devices are quite on a high side currently. We have got a hands-on with Galaxy A90 5G. 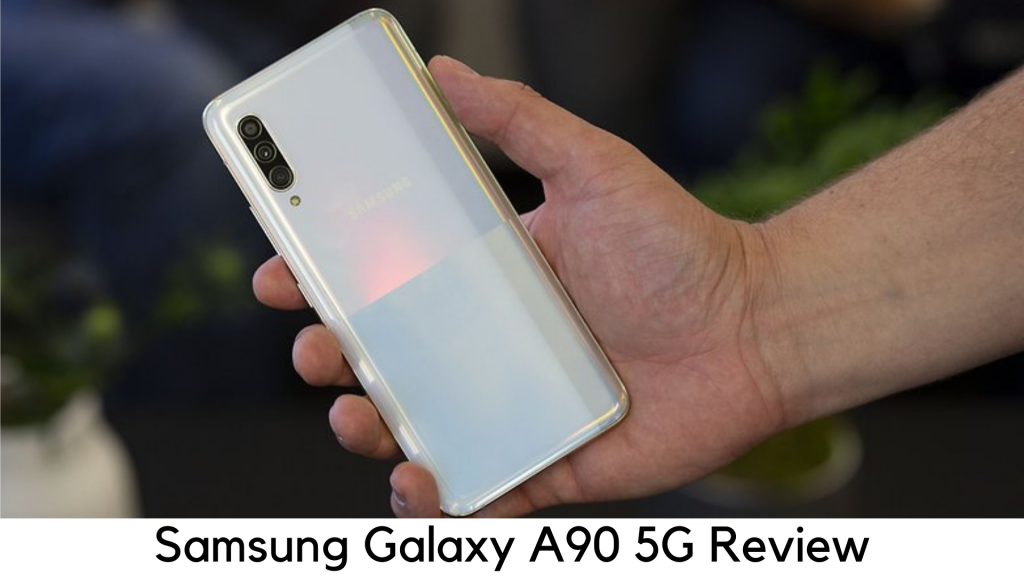 Just after its September 5 release, Samsung Galaxy A90 5G has been available for purchase in Korea. After a month, it was launched in the UK on October 4. If you live in the US or Australia, you need to wait a bit longer as the release date is still not clear in those regions. 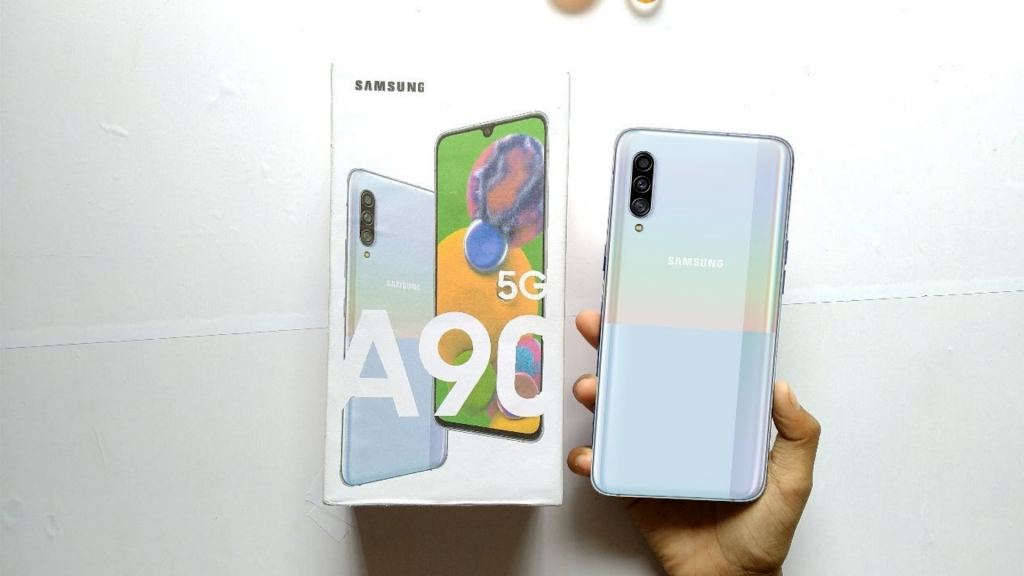 When it comes to price, the 5G device will be available for €749 (which is roughly £630, $830, and AU$1215). So, we cannot claim it to be an affordable device yet. But it’s a bargain as compared to other 5G devices. We couldn’t convert the launch price exactly to other reasons. So, it might be priced more or less in your region.

On paper, the Samsung Galaxy A90 5G is an ‘affordable’ smartphone, but it’s only in comparison to other 5G handsets. It still holds a premium price tag, according to many people. On the other hand, it is going to be built with materials that are expected from a mid-range device and it can be felt with its weight. 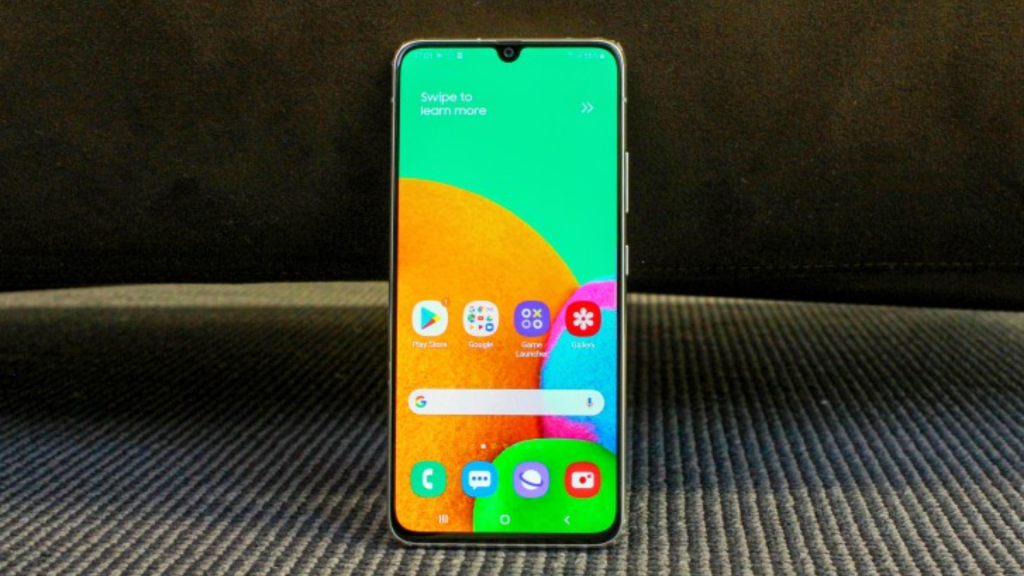 Samsung Galaxy A90 5G is, of course slim, but not that thin at flagship level. The tactile volume rockers and power button on the side feel solid and well placed but there is still some heft on its thickness.

Weighing around 206g, it feels quite heavier than its price. It is quite tall with dimensions of 164.8 x 76.4 x 8.4mm, even though not as wide as other devices with the same screen sizes.

With dual-tone rear panel, black plastics are quite heavily used in its built. The upper half comes with gloss shine but it splits halfway down. The rear panel of the phone shifts to the rainbow-black effect. It reminds us of Google Pixel 3 somehow.

At 6.7 inches diagonally, the display is quite large but appealing too. It held its own brightness and vibrant colors to deal with the glare of several overhead lights at the showroom. But it dropped the color vibrancy at an angle.

Super AMOLED display is really very sharp but not that crisp like other Samsung devices. The apps and text looked legible but the pixel density is apparent and gets close enough. Well, you won’t find any change in daily use. But it seems that its 5G support ramps up the price tag over everything else.

Like most of the Galaxy A series of phones, it has got an Infinity-U display. There is a tear-drop notch having a selfie camera. 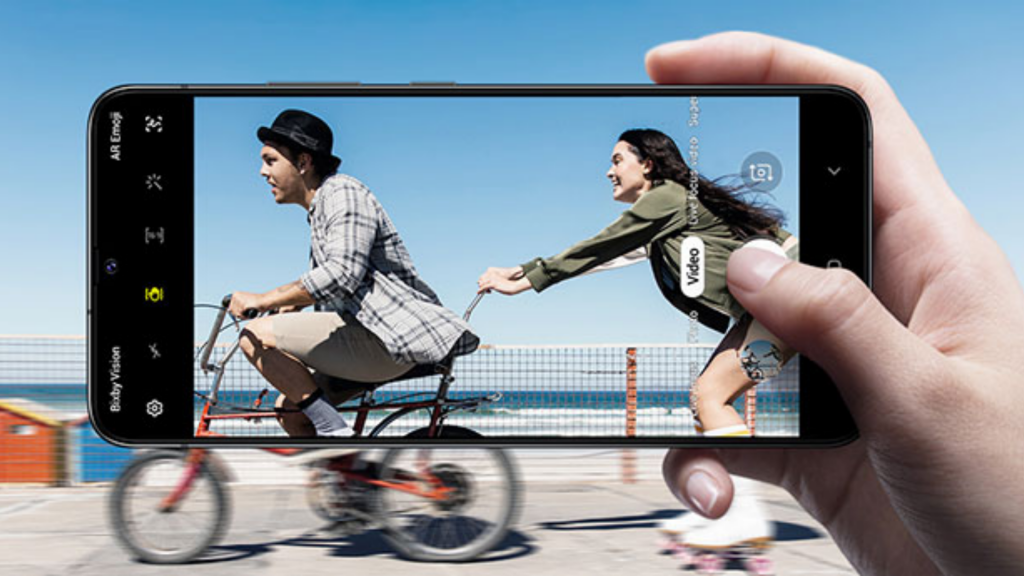 It means you can take pictures of your meals, pets, or friends with Samsung Galaxy A90 5G instead of far-away objects. It also has a 32MP front-facing camera, which is a high resolution for taking sharp selfies.

When it comes to responsiveness, it is truly visible in the device camera as well. The snapper launches quite quickly and focuses on the subject with just one tap and jumps into AR modes quickly.

You can quickly toggle between the camera modes with one swipe of the display. It also allows you to choose the mode and use it in a jiffy, even single-handedly. If it’s the first Samsung phone you are using, each setting’s name is confusing at first glance. You never know what “Live Focus” means before actually getting a hand on it.

When it comes to battery life, Galaxy A90 5G packs over 4500mAh of juice, which is quite huge. It takes some time to know the actual backup of the phone. But its capacity can definitely accompany you for longer.

Even though it seems discharging, its 25W fast charging is quite snappy. Let’s see if it comes with a fast charger bundled or you will need to buy it on your own.

When it comes to performance, our hands-on time was quite promising with Galaxy A90 5G. It was quite smooth when switching between apps, flipping through menus and loading apps and games. The screen response was quite fast and smooth with no lag or stutter.

The handset packs 6GB or 8GB of RAM, according to the model you choose. However, the processor the device would get power from is still not clear. According to the region, it could be Snapdragon or Exynos, just like other Samsung phones.

Similarly, it had no issues when switching between taps and apps for multitasking and firing up games. The demo model we tested had no games pre-installed to test. But the company claims that its processor would optimize with the game requirements on the go.

When you will need a power-packed headshot, it would supercharge the game. When using casual apps like Facebook or WhatsApp, it would bring back the performance to normal to save battery. It would have both faces unlock and in-display fingerprint scanner for security.

The Galaxy A90 5G is all set to come up as an affordable 5G phone which wouldn’t force you to break the bank just for 5G connectivity. The handset will come with all the features to make it impressive like the sleek design and sharp and bright display. Game optimization and other features make it worthy for gamers.

Samsung Galaxy A90 5G is one of the first 5G phones which are quite affordable. So, there is nothing much to compare. Its sharp display and robust performance make it quite closer to premium status.

How to Set a Custom Name and Profile Photo

How To Play Fortnite For Absolute Beginners