Officially announced with the flagship Note 9 Smartphone in a 2018 event, the much-awaited Samsung Galaxy Watch is finally here. The first thing you should note is that ‘Gear S’ naming series no longer exists. Samsung has started a new naming convention with Galaxy Watch. 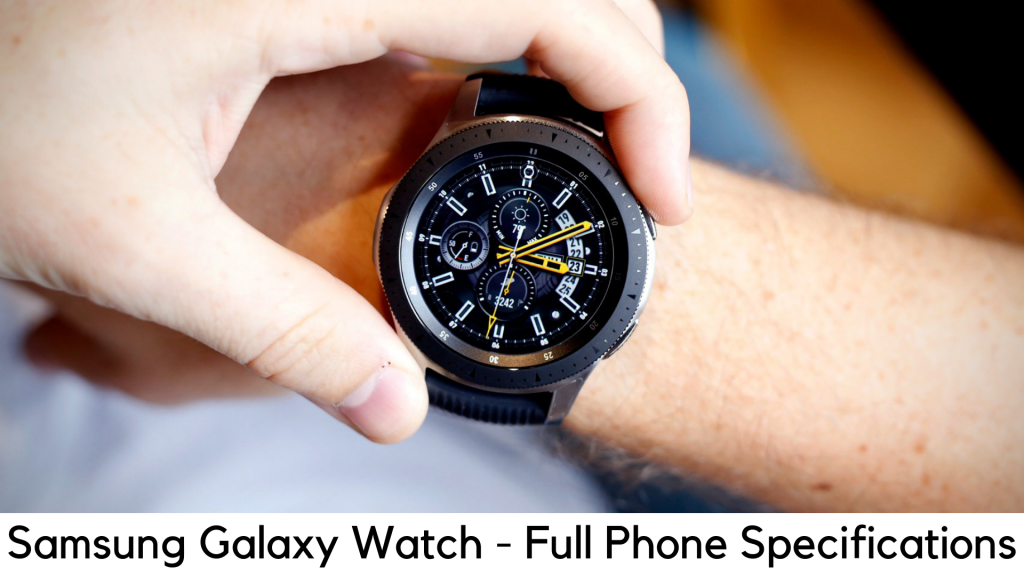 Does it have enough updates to justify the need for having a completely new name? Alternatively, Galaxy Watch is just a stylish model and a successor to Gear Sport to attract a large number of audiences.

Indeed, that redesign is the key to ensure the success of Galaxy Watch. Despite having some new features in this new smartwatch, it looks just like a common watch.

You can buy the 46mm model for $299 and a 42mm model for $279 from Amazon. The prices may vary when you see this guide. You can order them from Samsung, Best Buy, Amazon, and other online stores.

The LTE models are also available from a lot of carriers, such as T-Mobile. The LTE version of this smartwatch may cost around $50 higher than the current price. If you cannot pay the lump sum amount, there is also an option to pay $16 for 46mm and $15 for 42mm upfront and then $16/$15 as monthly installment for 2 years.

Out of the box, the first thing that can appeal to your eyes is none other than the Galaxy Watch itself. The best thing is that this smartwatch looks like a common watch.

The metal body and the large round dial are the key attractions here. Galaxy Watch is the first thing you would like after the Apple Watch if you want something more conventional.

However, techies may feel little uneasy. It is like a pure adaptation of age-old classic watches, as compared to Apple Watch, which comes with an iconic design like never before.

One thing you may not like is that you have to turn off the always-on display and show off nothing but a black circle most of the time to save battery. 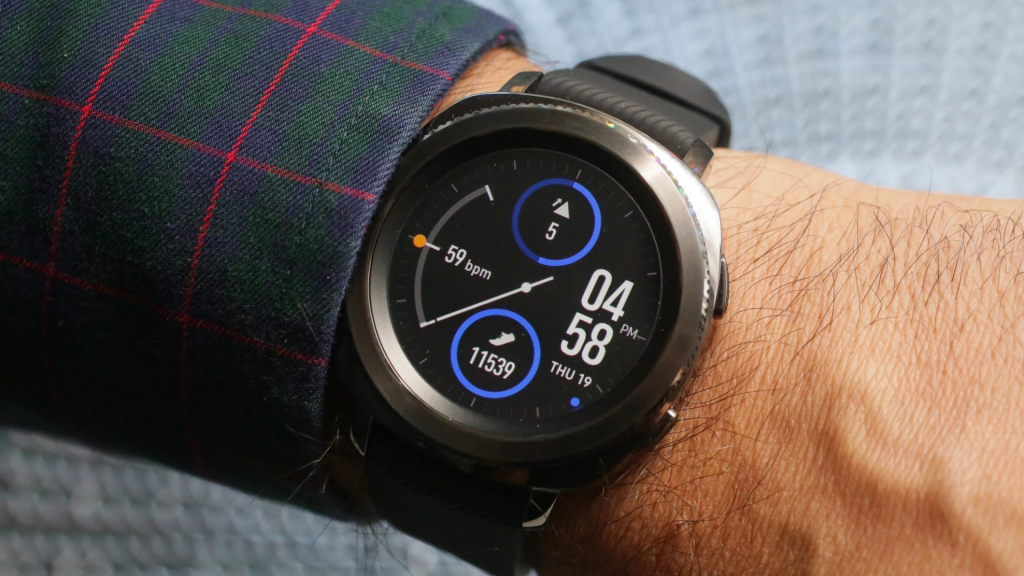 In terms of build quality, Samsung Galaxy Watch also stands behind Apple Watch, which feels pretty more premium and it is so comfortable to wear that it almost seems invisible.

Well, it does not mean Galaxy Watch looks and feels boring. It is more like a tech gadget than a part of an accessory. Though it might not match the taste of some techies, you will still love its design.

If you do not care about the design, Galaxy Watch has lots of plus points when it comes to functionality.

The best thing is the way you use the gadget. When it comes to usability and form-fitting, the Samsung Galaxy Watch is the first thing you would like. The two buttons and rotating bezel make the navigation even smoother when it comes to going through menus and apps.

The bezel is very tactile and has nice clicks when you rotate it. With a 1.2-inch display and 41.9 x 45.7 x 12.7mm dimensions, the 42mm variant easily pairs with straps of 20mm. This size is perfect for your 17cm wrists.

On the other side, the 46mm variant has a larger display of 1.3 inches but it adds the weight of 63gm.

The 46mm version is also the model of Samsung Galaxy Watch, which comes with the completely new battery. It comes loaded with a 472-mAh battery, which is a great improvement over 270-mAh battery found in 42mm variant.

However, it feels too large on most wrists. According to Techradar, the battery of 46mm variant lasts up to 4 to 5 days, which is pretty cool. However, the 42mm model can easily last up to 2 to 3 days.

Both LTE and Bluetooth models come with 1.15GHz dual-core processor and 4GB of storage. However, the major difference is more RAM (1.5GB on LTE variant) as compared to 768MB on Bluetooth variants. It is mainly because mobile connection needs extra room.

Battery life depends highly on what you have disabled or enabled. So, your experience really varies widely on your own usage. There are different options and settings available on the smartwatch you can do to save battery.

We have also tested some of the cool features that are always been promoted by the company. Therefore, we have turned on always-on display, consistent heart rate monitoring to record REM sleep patterns, and also set stress level monitoring to always. We have found around 2 to 3 percent of the difference in battery life per hour for daily usage. On the other side, there was also a drop of over 12 to 15 percent per hour when running while playing music offline. If you turn off the watch face during the day, it saves up to 1 percent per hour of battery life. 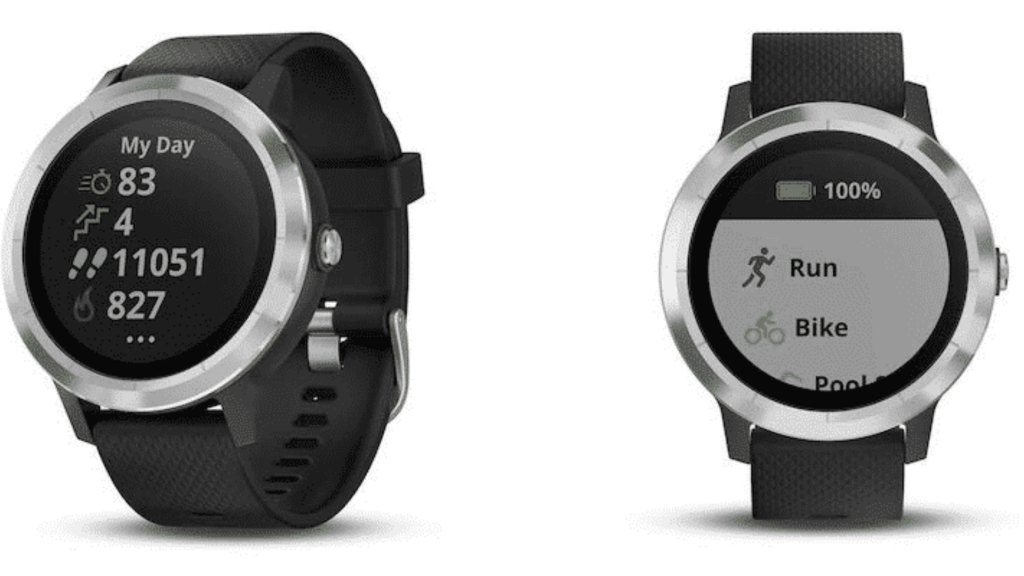 Since Samsung itself promotes advanced sleep tracking, the REM sleep tracking is turned on by default. After tracking sleep for 3 days and still not having any REM zones, we have found that you need to open Samsung Health on the watch to turn on REM sleep tracking. Then, scroll down and tap on the heart rate. On the right, tap the three dots, then gear icon to open Settings, and scroll up to tap on Always option. Now you can get REM zone on sleep tracking.

After turning it on, we have tracked this feature for two days. One showed no deep sleep with REM and others had no REM at all. Therefore, we were quite disappointed with the ability of the Galaxy Watch to track sleep.

However, gestures work really well, the bezel rotates flawlessly and side buttons are highly responsive. The watch looks stunning thanks to its bright OLED display. The hardware feels even better and stunning than the price. There is a 22mm standard strap configuration on the larger model. Therefore, you can buy other bands as per your style and needs. The smaller variant uses the typical 20mm strap design. Hence, there is no difficulty to find other bands at best prices online or you can also buy the original Samsung bands.

MST Radio was a great feature, which has been removed. According to Samsung, they have done it for a larger battery. After all, MST is a traditional payment technology and the company has had no reason to continue with this. For payments, you can use NFC with Samsung Pay on Galaxy Watch and MST with Samsung Pay on your Samsung Smartphone.

Samsung Galaxy Watch runs on Tizen OS 4.0. Hence, Samsung Galaxy Watch supports all Android devices running Android 5.0 or later versions as well as iPhone with iOS 9 or later. One thing that Galaxy Watch has no match is its user interface. Navigating is so fast, simple, and smooth that it can easily shame watchOS and Wear OS.

Sadly, Tizen is also the biggest downfall for smartwatches like its predecessors. It has small or no support for third-party apps. In the end, you have to use only built-in apps on Samsung.

Galaxy Watch has been mainly designed for health tracking. Hence, Samsung Health is now improved with new breathing and stress management tracking features. It also has a vast library of 39 tracked workouts and 21 indoor exercises. 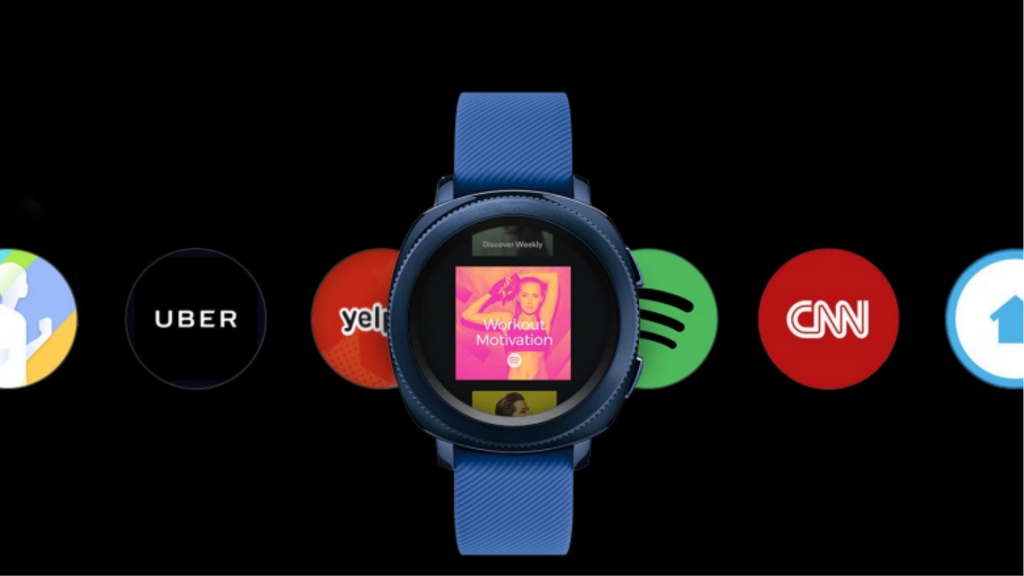 You can easily rotate the bezel to switch between several tracking options in Galaxy Watch. Unless you are an athlete, Galaxy Watch is very accurate. However, for marathon training, you should go with Suunto or Garmin.

Along with workout-tracking, Galaxy Watch also tracks your stress, gives a small stress score, and reminds you of deep breathing. Since it has sleep tracking, you may find it too bulky or uncomfortable to wear when you sleep.

The new smartwatch replaces S Voice and comes with new features like Samsung’s AI voice assistant and Bixby. Sadly, it is just a rebrand and nothing else. Bixby is as terrible as Gear S3’s S Voice. Even better, Google Assistant is much more responsive to your voice commands.

The 4G variant of Galaxy Watch has also been tested in different countries. The 4G model is exclusive for EE mobile contracts in the UK. The best thing is that this model contains eSIM. It means you can easily pair it with the device and choose any plan. 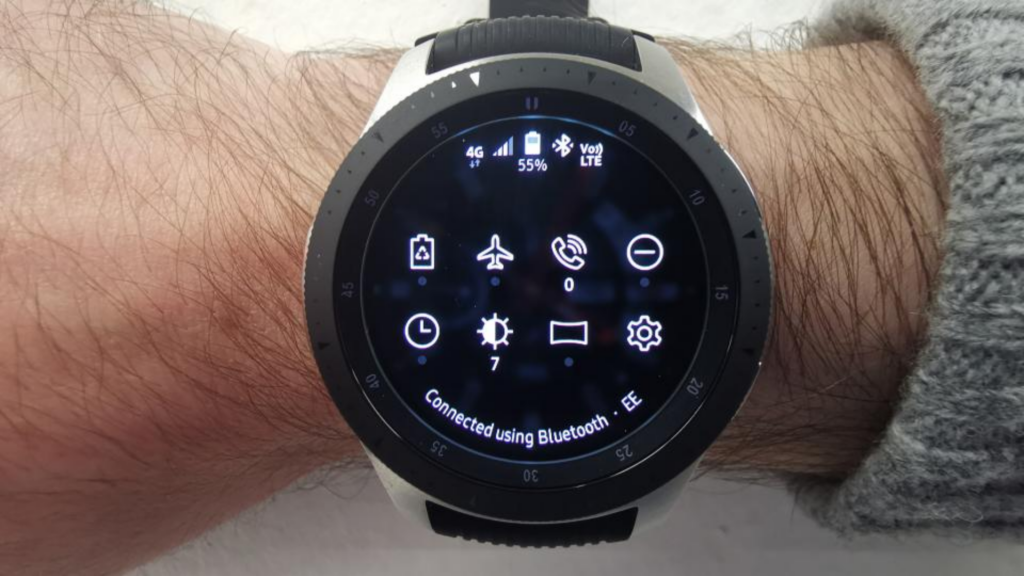 The smartwatch comes with a 2-year contract. It means you can use unlimited data on the watch only. The charges for text and calls are applicable to your Smartphone plan. The cellular function works smoothly. You can receive texts, calls and use data when you are out of range of your Wi-Fi network or your phone.

As of July 2019, both 42mm and 46mm Galaxy Watch variants are now getting a new firmware update. You can download the latest firmware “R810XXU1CSG4” which is only 15.36MB.

According to the official log, the update disables the automatic sync of alarms from your paired device and improves the system reliability. A bug has also been fixed which keeps users to have their phone vibrate or ring, except vibrating their watch. Now, auto-sync can vibrate and ring both watch and device or vibrate both. It also provides more accurate swim tracking.

Samsung Galaxy Watch comes in two different sizes to attract more people. Tizen is the best overall OS for smartwatches and it has decent battery life. However, there are some cons to keep Galaxy Watch from giving its true potential. For example, there is no ecosystem for third-party apps, terrible Bixby, and there are some design loopholes.

Despite some flaws, Samsung Galaxy Watch is the best overall smartwatch by Samsung until date. It is much better than its predecessors are, and it packs some of the cool new fitness tracking features. Therefore, it is a great package for health-conscious users.

Motorola One Action Review – The Perfect Android One Device by Motorola