When it comes to look at Nubia Alpha, the first thing you will see is its narrow, long curved display which you can wear on your wrist. When you wear it, don’t get surprised by curious strangers who might ask you about it. Some may feel that it seems like a band Batman used to wear while some think that it is a fitness band-kind of device. But honestly, Nubia Alpha is a crazy smartphone which adds appeal to your wrist. 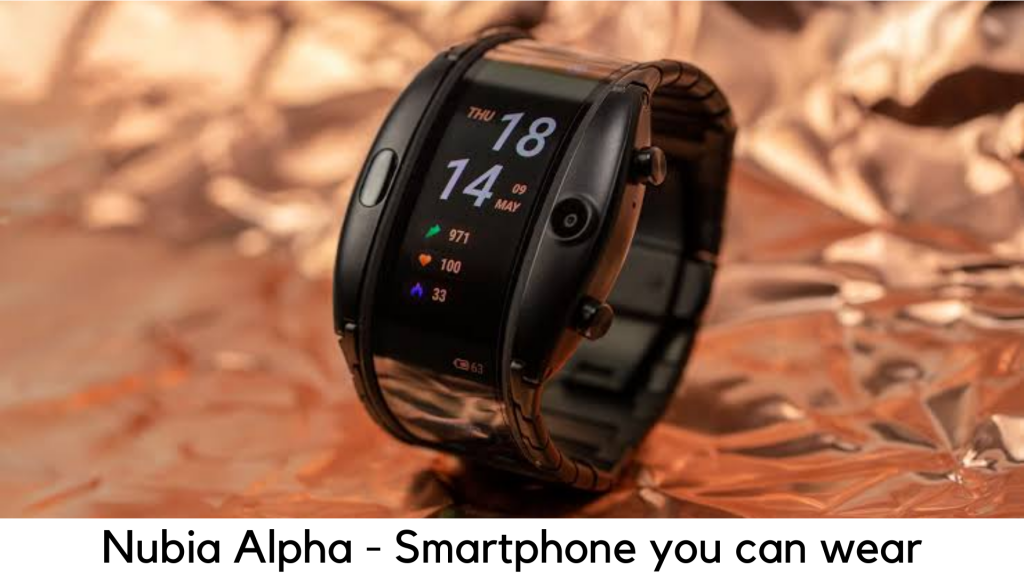 One of the most common questions is – What the heck Nubia Alpha is. It can be wrapped like a watch on your wrist, but it’s not a watch in any way. It is decked out with larger display than most of the smartphones out there and it can make calls for you. Whether you look at it as a smartphone or watch, it actually depends on your perspective on a phone.

The Nubia Alpha supports eSim to make calls in China, just like some of the models of Apple Watch. In the US, Nubia Alpha can paired to your device through Bluetooth. Whether you consider or not, but Apple Watches are definitely not considered as phones.

After using the so-called “wearable smartphone” by Nubia for a few weeks, I must say that it is definitely not a smartphone. At least, not the way we use our phones. It doesn’t even have a web browser. Leave Google Maps, Instagram, Uber or other apps alone.

Though you can easily criticize Nubia Alpha as a useless, crazy gadget, there are still some of the features and design elements you would like. Nubia actually misses a lot on its execution. But it comes with a new form factor and has set a new trend for wearables, I can say. It could definitely redefine what we look at our smart watches and smartphones, though a lot of fixes to be done here.

When tweaks have been made to the camera or ergonomics of its display and software improvements are made, Nubia Alpha would definitely be worthy of its hefty price tag of $449. You will mostly get a watch which definitely has features that can make it a head-turner.

The 4-inch OLED bendable display is one of the most worthwhile features in Nubia Alpha. It is mounted well on the steel band which fits securely and well on the wrist. You might be lining up 3 screens from one end to another in a row. There is lots of screen real estate and it really comes handy to read a huge string of texts. It really wraps across your wrist. It’s weird that Nubia is still not able to find out how you can check out emails on that bendable display.

You can’t see the whole display of the device without having to wrist your wrist in Olympic style. You could get the most of it if Nubia managed to move the display so you can see more of it in your wrist. I haven’t faced any durability problem with flexible display of Nubia Alpha. Remember the time when Samsung revealed the review samples of Galaxy Fold? It faced a lot of complaints regarding folding display.

You will see a 5MP camera atop the wrist. But taking selfies is really a terrible affair. I could often twist and stretch my arm to cover the whole head in its frame. But this little bit of effort rarely gave a nice shot. As per modern standards, image quality is quite bad. The photo quality is pretty much like iPhone 3GS. Nubia Alpha is far behind when it comes to getting great views.

It can record video, but only for 10 seconds. I don’t know why you are going to use a phone when you cannot get good image quality and can’t even record longer videos. If Nubia could move the camera within the wrist, it would really deliver decent videos and selfies. Moving both the camera and display calls for both right-handed and left-handed variant but it could be a lot more useful.

It would be even better if we could use at least one button to push the shutter. It’s odd to click a picture with in-display camera shutter as my fingers often block the camera.

Not a bracelet in any way

There is one myth should be busted here. Nubia Alpha is definitely not a slap bracelet. A metal link with dual clasp is one of the best things of this device. You can add/remove links easily to resize the watch over your wrist. It goes without saying that the Nubia Alpha is hefty and chunky. Unlike the silicone band, it felt secure and solid.

The battery which lived up to 48 hours on one charge is the best feature of Nubia Alpha. It also has IP65 rating for water and dust resistance. Actually, it lived up to dust, water splashes and some cold coffee splashed on it.

It is nice to say that Nubia tacked the software on this device. I really liked its Red Magic Mars smartphone which runs much like stock Android 9 Pie. In Alpha, it seems that company started from scratch. Its software is quite confusing and clunky to navigate.

Just playing a song is insanely difficult. From weather to fitness, it has lots of tiny apps. You need to type phrases or words to scroll through the display. It is very easy to navigate the apps, i.e. just like you would do with finger swipes and scrolls. It can detect gestures with Alpha Gestures. Even though it was cool, I don’t know how often I am going to use it.

The software was quite buggy with some inconsistencies. A new email notification shows up two times, once as Android push message and once from Gmail. The dialog boxes also have “OK” “Cancel” missing. It has lots of fitness features. For example, you can track your steps, heart rate, sleep and workouts.

Fortnite Save The World Mode